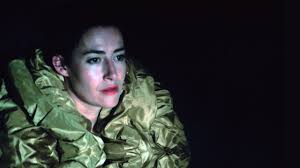 La Passion De Simone is a contemporary oratorio by Finnish composer Kaija Saariaho for solo soprano, orchestra and electronics, following the life of French philosopher, activist and mystic Simone Weil. The libretto by French author Amin Maalouf is a series of reflections on Weil’s musings as a political activist and philosopher, as addressed to Weil herself, and is juxtaposed by spoken text from Weil’s writings.

Born in 1909, Simone Weil was a teacher and later a political activist and philosopher who became involved in the Spanish Civil War and French Resistance. Following her mystical experiences, she converted from Judaism to Christianity and fled to London with her parents in 1942. In a gesture of allegiance with factory workers in German-occupied France, she refused to eat more than the measly rations consumed by the workers, and later died of malnutrition at the age of 34.

Saariaho uses the Passion Play style to present Weil’s story in a manner that almost posits Simone Weil as a Jesus Christ-like figure. While the orchestral score is reminiscent of Stravinsky’s Rite of Spring in its dramatic use of short, unresolved melodic phrases and dissonant harmony, the vocal line features only obtuse, discordant phrases in order to convey the distressing nature of Weil’s final moments.

In this production, the Sydney Chamber Opera orchesta, conducted by Jack Symonds, was positioned at stage left and featured live narrators and electronics in addition to chamber orchestra. Director Imara Savage conveyed the bleak and claustrophobic nature of Weil’s dying moments sparingly through symbolism. A large mound of rice was heaped centre stage and solo soprano Jane Sheldon sang throughout with her back to the audience whilst positioned upstage centre. Pre-recorded footage of the protagonist slowly being buried alive in grains of rice was projected onto a screen, with her facial expression and stance becoming more agitated as the oratorio progressed. As Weil’s dying moments drew nearer, the projection cut to the grains of rice falling thick and fast over her face until they became like television static filling up the entire screen, symbolizing Weil’s death by starvation.

In opera, both musical and theatrical elements are equally important in delivering the emotional impact of the story. The Sydney Chamber Opera’s production of La Passion De Simone, presented as part of the Sydney Festival, could not be faulted in conveying the essence of Simone Weil’s moralistic philosophy and passion for social justice. As an audience member with little prior knowledge of Simone Weil and her writings, I was incredibly moved and left the theatre at Carriageworks eager to learn more.